We were talking to someone the other day about a new app called Bamboo that saves you having to queue in takeaways as you can pre-order and pick up your food, saving you standing in line. The other person hadn’t heard of Bamboo and then wondered what was the need for such an app? She wondered were we that time poor that we needed to save ourselves a maximum ten-minute wait.

But of course, that’s not the point. The point is, in this digital age, that tech can facilitate us, so therefore why not use it? Similarly, we at iKydz wonder why everything around internet regulation takes so long to implement? There’s hand wringing galore going on about how to keep our kids safe online, but there’s not much action. Meanwhile we have developed the perfect tool, designed by parents, to keep kids safe immediately.

“This is both morally wrong and deeply unfair to parents”

The UK Health Secretary, Jeremy Hunt, has threatened new laws if the social media firms don’t do more to protect children online. That is a good thing and he should continue to push them. He has given the Facebooks and Googles until the end of this month to outline whatever actions they plan on taking to cut underage use, preventing cyber bullying, and promoting healthy screen time.

The Conservative MP wrote to the firms saying, “I am concerned that your companies seem content with a situation where thousands of users breach your own terms and conditions on the minimum user age.

“I fear that you are collectively turning a blind eye to a whole generation of children being exposed to the harmful emotional side effects of social media prematurely.

“This is both morally wrong and deeply unfair to parents who are faced with the invidious choice of allowing children to use platforms they are too young to access or excluding them from social interaction that often the majority of their peers are engaging in.”

Act Now. Think of your children.

Social media companies make their money by encouraging and not discouraging usage of their platforms. They’re not going to watch their massive businesses be threatened by government. So don’t hold your breath waiting for them to do anything.

If you are a concerned parent don’t wait for the UK government to slug it out with the (mainly) American giants. Act now and install iKydz. Your kids are growing up while politicians talk about taking action. You can take your action now. Remember, it’s for your children’s sake.

The tiny device that gives parents control over their children’s online time. 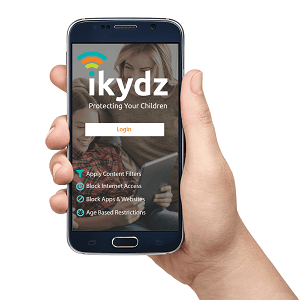 Which iKydz product is for you?

There is an iKydz solution for every family.